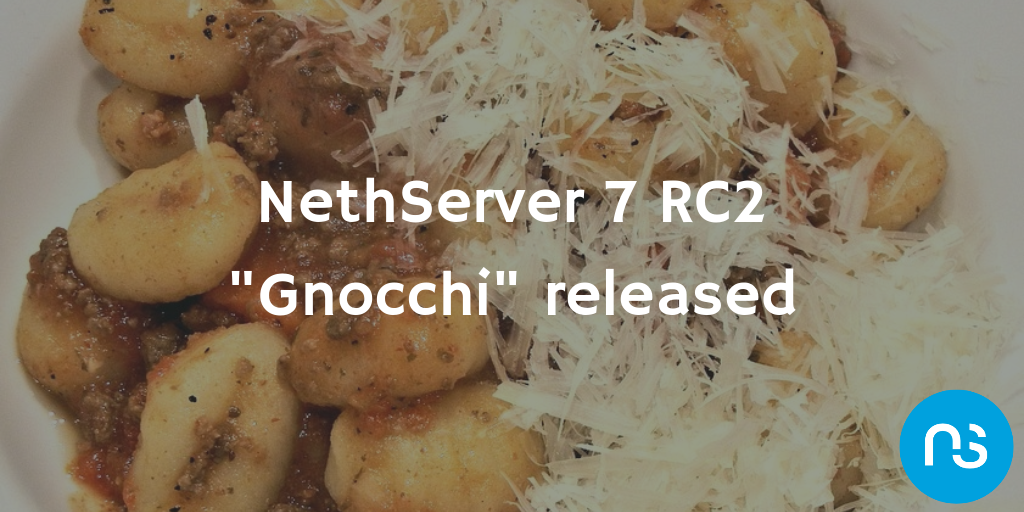 We’re approching very quickly the final release but we’re still knee deep in fixing bugs and sorting out some issues that came up since the last release.
Now, after a few weeks of hard work, we’re finally ready for a new release of NethServer and it’s time get it off the ground.

Today, I’m excited to announce that NethServer 7 RC2 “Gnocchi” has been released and is publicly available.

In the past, we asked for help from our members to make NethServer 7 the best release yet and this is happening!

The RC2 release of NethServer 7 introduces no new features but aims to fix bugs in previous releases.

By default, NethServer 7 enables the @domain suffix in user and group names, this new convention confuses the system user, and force to reconfigure his account credentials on any network client. Moreover, some applications require a configuration adjustment and such default is quite different from the previous NethServer version 6.x approach.

We have defined an additional option to support both name forms (short, long) and keep all data consistent.

These are just the major highlights in 7 RC2 but there are other tiny improvements, refinements, and bugfixes that we aren’t covering here like:

A release candidate (RC) is a testing version with the potential to be a final product, which is ready to release unless significant bugs emerge. RC releases can be used in production, especially if new features are not used on mission critical systems. Upgrades to the final release will be supported.

Even in RC2, the most notable new feature that needs a good amount of testing is the AD Domain Controller setup, with particular focus on the depending functions such as email, shared folders and user authentication.

This RC2 release contains all the exciting features of NethServer 7 in a form that anyone can help test. This testing, guided by the NethServer team, helps us target and identify bugs.

No new modules will be added or modified before the final release, we invite to stay tuned with our community for fresh news and updates about the forthcoming Stable Release.

Gnocchi are thick, soft dough dumplings that may be made from semolina, ordinary wheat flour, egg, cheese, potato, breadcrumbs, cornmeal, or similar ingredients, with or without flavourings of herbs, vegetables, cocoa, or prunes. The dough for gnocchi is most often rolled out, then cut into small pieces of about the size of a cork.

We need your help to make NethServer 7 the best release yet, so please take some time to download and try out the RC2 and make sure the things that are important to you are working.

If you find a bug, please report it replying to this topic – every bug you uncover is a chance to improve the experience for thousands of NethServer users worldwide, also our amazing quality team will be called upon to give its support on that!

Let’s look for this sweatshirt at FOSDEM

5 Reasons that make you an active member on community

Why an average member become an active member? What are his motivations? What has helped…

This site is licensed under CC BY-NC-SA 4.0 while the project is licensed under GPLv3
×
We use cookies to make sure you can have the best experience on our website. If you continue to use this site we assume that you will be happy.Ok