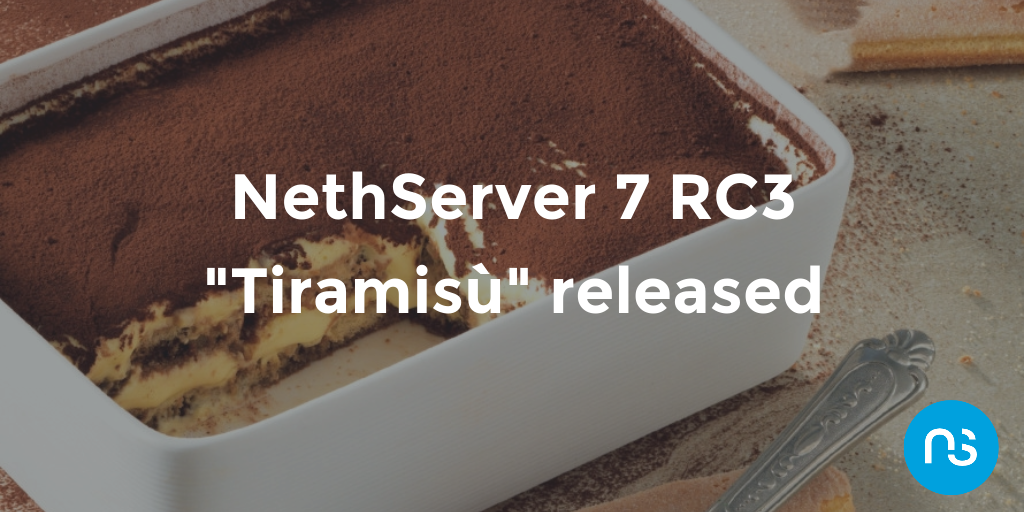 Time is gone in a rush since our last Release Candidate and we’re approaching very quickly the final release, but as you know we’re still fixing bugs and sorting out some issues that came up.

Now, after a few weeks of hard work, we’re finally ready for NethServer 7 RC3 “Tiramisù” and it’s time to get it off the ground.

The RC3 release of NethServer 7 introduces some new features and aims to fix bugs from previous releases.

We have changed the behavior of the Transparent HTTPS proxy dropping the MITM (Man In The Middle) feature that inspects all the encrypted traffic, substituting it with a new implementation that sniffs only the beginning of the connection to discover the destination website (for filtering purposes).

We can do this now because CentOS 7.3 introduced squid 3.5 which has a new function to intercept HTTPS connections, called peek and splice.

Basically, it means that we peek at the beginning of the connection to discover the destination website (and block it if desired) and then let the traffic flow unaltered from the client PC to the secure website.

Some improvements introduced with this solution:

The web UI hasn’t been modified (only the certificate download button has been removed) because the behavior has changed under the hood.

Due to the recent upgrade to version 3.5, Squid is no longer compatible with squidGuard, so we had decided to replace it with ufdbGuard which is one of the best URL filters that can be found on the internet.

Once an account Provider has been configured, it’s always possible to switch it off, and on again or choosing a different one.
The “Advanced settings” section under SSSD Configuration page displays library defaults as input fields “watermarks” according to the currently selected account provider.

We recommend reading the new manual page about Account Providers that explains the supported scenarios.

CentOS 7.3 comes with a new kernel version (3.10.0-514), which is compatible with the nDPI kernel module. Users in need of Deep Packet Inspection no longer need the custom kernel-lt.

While the old management interface hid the system “administrators” group, now the new version supports the AD concept of “subgroups”, where a group member can be a group itself. Also “Domain Admins” is visible and its members can be modified (a common practice in AD world).

The Dashboard panel that counts the system users now reflects the number of users and groups listed on the “Users and groups” page.

This release has been rebased on CentOS 7.3 which is the current release for CentOS Linux 7 and is tagged as 1611, derived from Red Hat Enterprise Linux 7.3.

As always, read through the Release Notes at http://wiki.centos.org/Manuals/ReleaseNotes/CentOS7 – these notes contain important information about the release and details about some of the content inside the release from the CentOS QA team.

These are just the major highlights in 7 RC3 but there are other tiny improvements, refinements, and bugfixes that we aren’t covering here like:

A release candidate (RC) is a testing version with the potential to be a final product, which is ready to be released unless significant bugs emerge. RC releases can be used in production, especially if new features are not used on mission critical systems. Upgrades to the final release will be supported.

Even in RC3, the most notable new feature that needs a good amount of testing is the AD Domain Controller setup, with a particular focus on the depending functions such as email, shared folders and user authentication.

No new modules will be added or modified before the final release, we invite to stay tuned with our community for fresh news and updates about the forthcoming Stable Release.

Tiramisu (from Italian, spelled tiramisù [tiramiˈsu], meaning “pick me up”, “cheer me up” or “lift me up”) is a popular coffee-flavoured Italian custard dessert. It is made of ladyfingers dipped in coffee, layered with a whipped mixture of eggs, sugar, and mascarpone cheese, flavoured with cocoa. The recipe has been adapted into many varieties of cakes and other desserts. Its origins are often disputed among Italian regions such as Veneto, Friuli Venezia Giulia, Piedmont, and others.

Being a dessert would be indicative of the end of the development cycle.

We need your help to make NethServer 7 the best release yet, so please take some time to download and try out the RC3 and make sure the things that are important to you are working.

How to report bugs

If you find a bug please report it opening a new topic in our community and tagging it with v7-rc3 label – every bug you uncover is a chance to improve the experience for thousands of NethServer users worldwide, also our amazing quality team will be called upon to give its support on that!

We use cookies to make sure you can have the best experience on our website. If you continue to use this site we assume that you will be happy.Ok